A cheminformatic search of natural anti-retroviral drug HOO-IMM PLUS 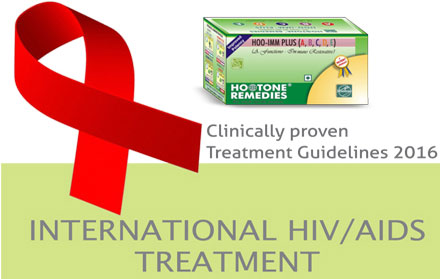 A cheminformatic search of natural anti-HIV drug HOO-IMM PLUS

The use of Natural medicinal plant to manage HIV/AIDS has recently gained public interest, many research have been done on the ethnomedicine around the globe. Although there have been no medicine licensed till date, this policy remain an arguable issue in many countries. Plants and other natural products present a large repertoire from which to isolate novel anti-HIV active compounds. In this research work, with HOOIMM PLUS an anti viral herb-drug manufactured by HOOTONE REMEDIES, have a composition of 33 different plant species those are found in India, were found to contain anti-HIV active compounds that included diterpenes, triterpenes, biflavonoids, coumarins, gallotannins, galloylquinic acids, curcumins and limonoids etc. They also contain the high phenolic content and the presence of polar substances, such as flavonoids and tannins which are known to possess antiviral activity. These active compounds inhibited various steps in the HIV life cycle. The main objective of this study was to carry out a database survey of literature for plants and their natural products with anti-HIV active compound present in HOOIMM plus. Such a Bioinformatic database survey is an important prerequisite and starting point in the search for novel HIV/AIDS treatments from natural plants.

The conventional rediscovery process aims to identify a single, pure active constituent from an active extract and a method to estimate it in the crude drug. The classical example of drug discovery like morphine, quinine, digoxin, etc which replaced the extracts of their respective plants were mostly responsible for harbouring the idea that a single active ingredient must have been responsible for the bioactivity. The drawback of this ideology is that it does not look into the synergy or antagonism characteristics present in the mixture. Apart from this some constituents may also possess other diverse activities. This factor is confirmed by several examples reported in literature where the ascribed pharmacological activity of the extracts could not be matched with that of the isolated pure compounds. Most of the newer work on medicinal plants is mostly the rediscovery of effects known for a long period of time at cellular and molecular levels. The uncertainty of earlier studies is obvious in case of biological activity because of the lack of standardization technique or instance where even if present were in a primitive state.

The natural plant medicine has a very long term history of usage in a number of disease and disorders, however, the main constituent mainstay and the mechanism of action being unclear. But recently, it has been suggested that drug discovery should not always be limited to discovery of a single molecule and the current belief “one disease-one drug” approach may be untenable in the future and that rationally designed polyherbal formulation could also be investigated as an alternative in multi-target therapeutics and prophylaxis. Development of standardized, safe and effective herbal formulations with proven scientific evidence can also provide an economical alternative in several disease areas. Still some pro's and con's need attention for improvement of natural medicines.

HIV/AIDS-related diseases remain one of the leading causes of death globally. According to UNAIDS, the number of people living with HIV/AIDS worldwide was estimated at 35 million. The current antiretroviral drugs have many disadvantages including resistance, toxicity, limited availability, high cost and lack of any curative effect (Vermani and Garg, 2002). These shortcomings of conventional ART continue to open new vistas in the use of ethnomedicinal plants and other natural products for the management of HIV/AIDS.

As early as 1989, the World Health Organization (WHO) had already voiced the need to evaluate ethnomedicines and other natural products for the management of HIV/AIDS: “In this context, there is need to evaluate those elements of traditional medicine, particularly medicinal plants and other natural products that might yield effective and affordable therapeutic agents. This will require a systematic approach”, stated a memorandum of the WHO (1989).

The objective of this study was to carry out a database survey of literature for plants and other natural products with anti-HIV active compound present in HOOIMM PLUS.

a Bioinformatic database survey is an important prerequisite and starting point in the search for novel HIV/AIDS treatments in natural plants. However, further studies are needed to determine their interactions with current regimes of antiretroviral drugs. More clinical trials of candidate drugs developed from these novel compounds are also encouraged.

The different plant species with their active HIV compound were searched in PubMed Central, the United States of America National Library of Medicine's digital archive of biomedical and life sciences journal literature. During the literature search which lasted 3 months, between 300 journal publications were reviewed. Wherever possible, families and species of plants and other natural products, their active compounds and modes of action, were Evidence of use of plants and other natural products against HIV/AIDS was kept unrevealed to maintain the term and policy of pharmaceutical company (HOOTONE REMEDIES), so different codes were given for different active constituents.

Table 1.1: Showing Mechanism of action of various active constituents found in HOOIMM plus. 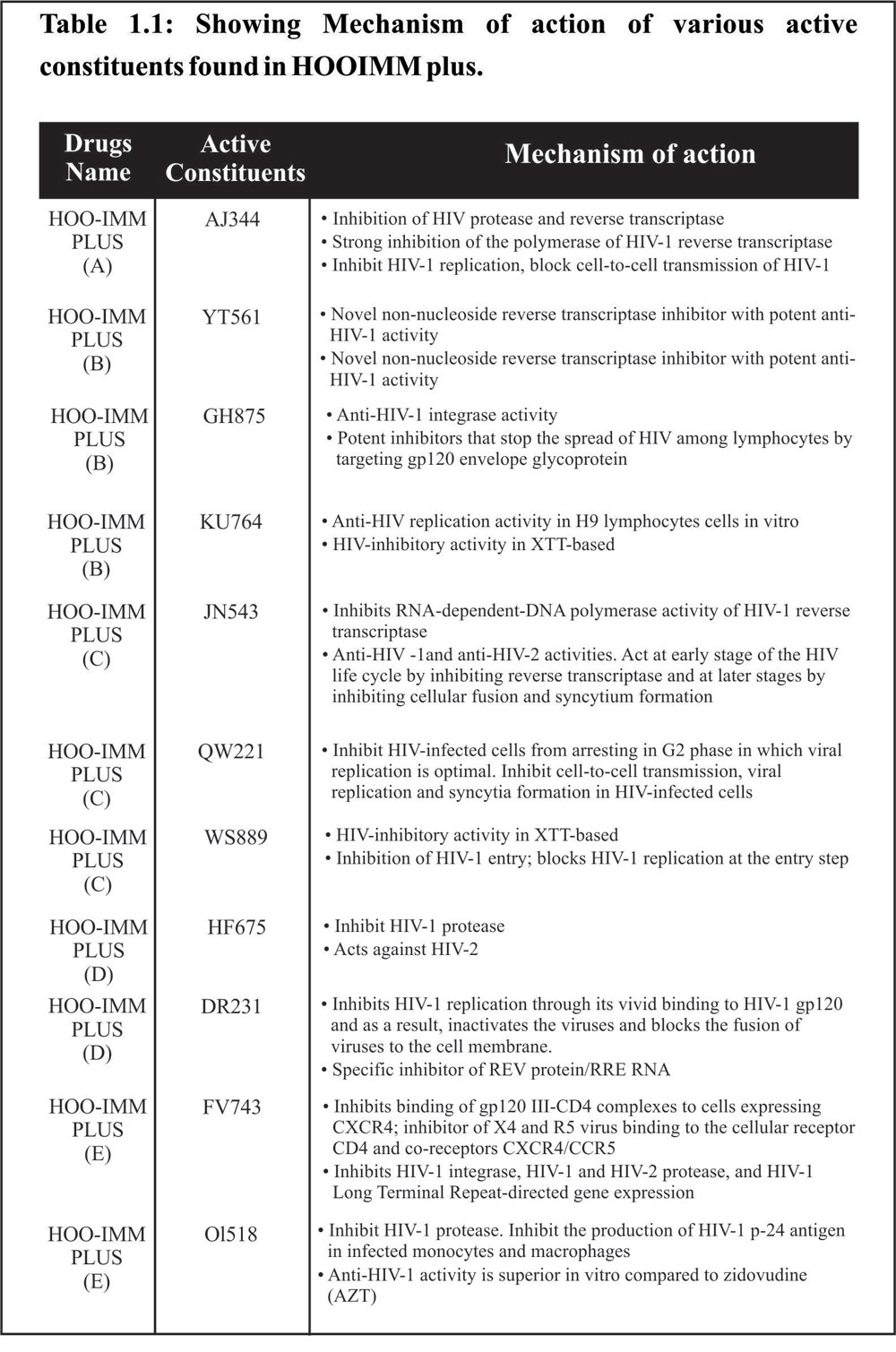 Several chemical compounds were found to interfere with HIV entry into cells while other were active against HIV reverse transcriptase, integrase, protease, and general replication. Most of the entry inhibitors stopped the spread of HIV among cells. Some of them binds to glycosylated viral envelopes blocked HIV-1 entry into cells. A compound isolated targeted gp120 proteins and blocked fusion of HIV-1 to lymphocyte. A crude drug inhibited HIV-1 gp120 binding to CD4 cells, inhibited the binding of gp120 to cells expressing CXCR5 receptors. Inhibited cell-to-cell transmission of HIV-1inhibited HIV-1 entry into lymphocytes. Three different chemical compounds were known to be active against HIV reverse transcriptase (Table 1). Three active compounds were observed to be HIV protease inhibitors. Two active compound were observed to be HIV integrase Inhibitor. Some active compounds were found to inhibit syncytia formation, a property of HIV that makes infected and healthy CD4 cells to fuse and form one giant cell. Many active compounds were known to inhibit general HIV replication. Some plant-derived compounds were reported to possess activities against HIV-related symptoms.

The literature survey revealed several anti-HIV active compounds such as terpenoids, coumarins, polyphenols, tannins, proteins, alkaloids, and biflavonoids that inhibit various steps of the HIV life cycle. These active compounds were isolated from 33 Plant species. Phylogenetic analysis and other bioinformatics tools may shed light on unidentified but related plants and other organisms that may contain similar active compounds. Primary data of known active compounds and mechanisms of action were available from studies. Pharmacological interactions of unknown active ingredients from herbal medications remain a source of great medical concern. Throughout the survey, it was clear that although several medicinal plants, most of the research on screening of plants and isolation of active compounds was carried out elsewhere in Asia, Europe and the Americas. in vitro tests against HIV, and mechanisms of action is highly needed. There is also an urgent need to fast-track HIV/AIDS clinical trials of candidate drugs developed from novel compounds isolated from plants and other natural sources. This will ensure that the millions of people that require HIV/AIDS treatment will have access to newer, more effective, and less toxic drugs.

“The Research on Anti-HIV active compounds” in 2014.

I was detected with HIV in 2000 & undergone treatment with HOO-IMM PLUS.